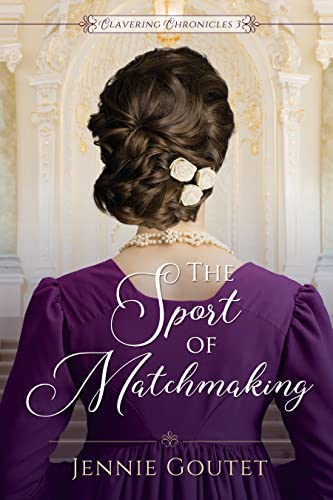 The Sport of Matchmaking (Clavering Chronicles Book 3) by Jennie Goutet

For once, he has met a lady less inclined to marry than he is. How unfortunate that she is the only bride he will consider.

George Clavering is much too young to think about getting married. Yes, his older brother—and even his younger sister—have managed to tie the knot, but he has plenty more years of play and sporting events ahead of him before he need consider such a thing. Even matchmaking becomes a sport when gentlemen bet on the Season’s successes or failures in the club. He will not give them an opportunity to bet on him. Furthermore, why settle down when there are young women like Lady Alice who liven the sport of matchmaking with friendly wagers?

Lady Alice St. Clair is the fifth daughter of the Duke of Carr, and as she is independently wealthy and may do as she pleases, she has no reason to wed. She certainly has no intention of doing so. If the marriage mart offers nothing more than the unattractive boors who have presented themselves at her door for the past five seasons, it should hardly surprise her parents she cannot be persuaded to the altar. True, George Clavering has a full head of dark hair and a smile that is as mischievous as it is attractive, but no lady of character would change her mind for one above-average specimen of the male race.

For both, what began as a friendly bet between two bored guests at a ball turned into an earnest desire to help their protégés find happiness. And if some deeper feelings should stir in George to win Alice’s heart, then he has no choice but to dampen them. After all, Lady Alice has sworn she will not marry, and George has applauded her decision. For him to try to weaken her resolve now would be…unsportsmanlike.