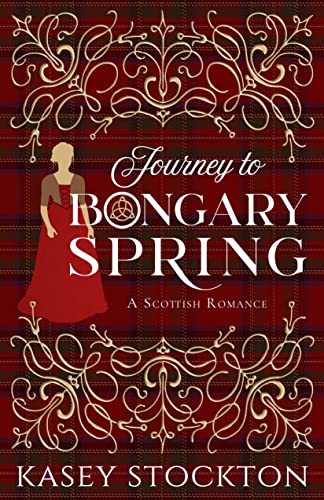 Isobel McEwan has been beholden to her chief for eight years—ever since he took her in and gave her a home after her parents died. So when he asks her to marry a rival laird to aid the clans in finding peace, she has little choice but to agree to his request. The only problem: she’s desperately in love with another man.

To free herself from the burden of unrequited love before entering into a marriage of convenience, Isobel devises a plan to journey to the healing well that has helped so many others, certain that if she can drink from its spring, she will be healed from her lovesickness for Kieran and prepared to marry the rival laird. But her chief will never willingly let her go, so she must sneak out in the dead of night and cross through dangerous lands alone.

After watching a rival clan kill his father in an ambush, Kieran Buchanan’s only ambition in life is to see them pay for what they did. Biding his time until he can accomplish his goal, Kieran dedicates his life to helping his uncle’s clan train and defend themselves. He’s sworn fealty to his uncle, so when the man asks him to track down Isobel and bring her home, he complies.

With the man she loves close on her tail, Isobel must hurry to the spring if she has any hope of callusing her heart against him. But what can she do when he catches up to her on enemy territory?

**Book one in the Myths of Moraigh Trilogy. The books are not stand-alone novels and must be read in order for full comprehension, but each novel has its own satisfying love story.**