Trust No One - Pillow Talk Books Skip to the content 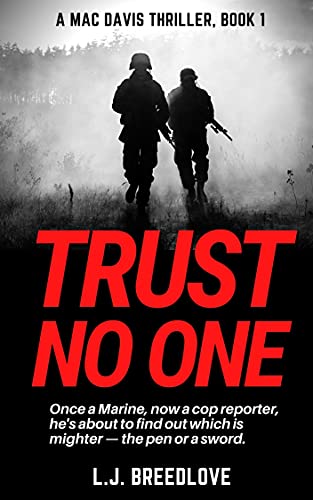 Trust No One by L.J. Breedlove

WHEN YOU COME FOR THE WRONG MAN

Howard Parker wants to be Secretary of Homeland Security. And he isn't going to let a bunch of Marines who were in the wrong place at the wrong time stand in his way — even if one of them is now a reporter in Seattle, his home town. What are the odds?

Former Marine Mac Davis likes being a cop reporter. He gets a regular paycheck, and no one is shooting at him. What's not to like? So yeah, he has to hang out around cops, but every job has its downsides.

Then someone tries to kill him. Roughs up his aunt. Kidnaps an old Marine buddy. And Mac is going to find out why. And then? He'll put a stop to it. One way or another. If the tools of a reporter won’t get the job done? Well then, he’s got other tools to use.

Amazon - US Amazon - UK Amazon - CA Nook - BN Kobo Apple iBooks Scribd
Genre: Other
Book Length: Novel - 150-320 Pages
A story that is not streamlined with a particular genre is listed under others. These books generally have mixed content. Somewhere these books talk about romance and switch to suspense after a couple of pages and many other kinds of content can be expected from these books. Readers who are not too specific about the genre can pick any from others. If you have reading habits and can pick any without being so particular then others section is for you. Selecting a genre-specific book might be a tedious task for you. So just go easy. Happy Reading.