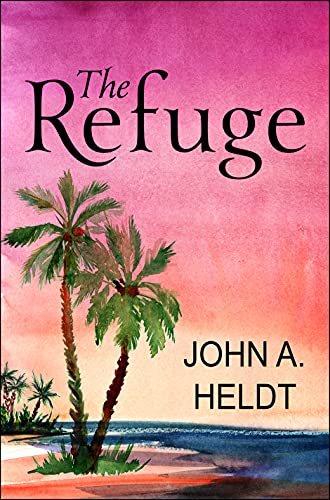 The Refuge (Time Box Book 4) by John A. Heldt

From the author of THE LANE BETRAYAL, THE FAIR, and SEA SPRAY comes the fourth novel in the Time Box saga.

Months after stealing two time machines, the Lanes, a modern family of seven, make a stand against the unhinged software mogul who wants them back. They travel to 1941 Oahu to eliminate the billionaire's mercenary, an assassin who has chased them through time.

While son Jordan, a former intelligence officer, stalks his unknowing foe in the streets of Honolulu, his parents, younger siblings, and pregnant wife settle in the village of Laie, where love, friendship, and opportunity await. All seek refuge from the perils of time travel.

Hit man Silas Bain has his own agenda. He hopes to alter the events of December 7, 1941, and indirectly save a brilliant German physicist, his employer's grandfather, from certain death. He has prepared for every contingency, except the charms of a beautiful heiress.

Filled with romance, suspense, and intrigue, THE REFUGE takes readers on a thrilling and memorable ride through the colorful, magical, and dangerous world of pre-Pearl Harbor Hawaii.

Readers' Advisory: The Refuge is the fourth novel in a five-part family saga that spans several decades. While some storylines are resolved, others are not. They will be addressed in subsequent books.
Amazon - US Amazon - UK Amazon - CA
Genre: Historical
Book Length: Long Novel - 320-650 Pages
Historical fiction is a literary genre in which the narrative takes place in the past. Historical books capture the particulars of the time as correctly as possible to get authenticities, such as societal norms, ways, habits, and traditions. Historical fiction is put in a real location during a culturally recognizable moment. The facts and the actions from the narrative can be a mixture of real occasions and ones in the writer's creativity as they fill in the gaps. Characters may be pure fiction or based on actual people. But what about them and their look and attitudes, how they talk, and issues that they face, everything which should match the era.