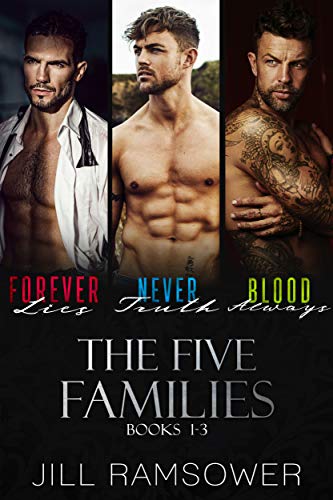 Now in a convenient ebook bundle, here are the first three novels in Jill Ramsower’s captivating Five Families Series. The full-length, bestselling novels feature the three Genovese sisters as each seeks to find love in a dangerous mafia world of lies, schemes, and betrayal.

“I swear this series keeps getting better and better!” -Amazon Reviewer

Five minutes in a stalled elevator was all it took to turn Alessia Genovese’s world upside down. She was just one among millions of New Yorkers, but now, she’s landed on Luca Romano’s radar, and he isn’t about to let her walk away. Luca’s secret agenda shatters Alessia’s perfectly crafted life--sometimes lies are easier than the truth…

Nico Conti was the center of my universe—until he shattered my heart, leaving me broken and alone. For ten years, I had to find my way in the dark. Now he’s come back, trying to explain away his absence and pick up where we left off, but I’m not the same girl he abandoned. I have enough secrets to rival his own, and if I’m not careful, he’s going to unravel every one of them.

It should have been a simple arranged marriage, but fate had other plans. He saw her untamed independence as a challenge. She saw his alluring authority as a threat. Their lives were altered irrevocably—from enemies allied by a strategic marriage to something dark and consuming. Something that tasted like obsession.

Warning: These are mafia romances intended for mature audiences with some elements that may be inappropriate for sensitive audiences. If you like a sharp edge to your romance and deliciously dangerous leading men, get ready to lose yourself!