Knock Down Dragon Out - Pillow Talk Books Skip to the content 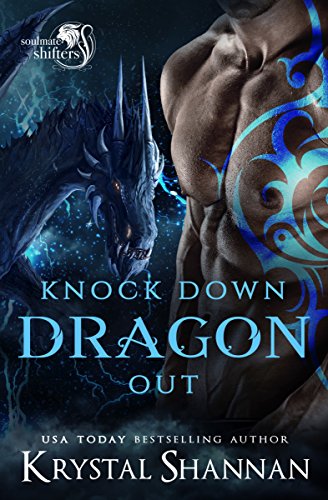 Knock Down Dragon Out by Krystal Shannan

An overwhelming need to get away from life—from grief—sent Naomi Parker on a trek through Alaska. Even though she was expecting to photograph some unique wildlife, she was NOT expecting a dragon. They don’t exist, right? Wrong. And a dragon who turns into a human? Even more unlikely.

A hot dragon prince... yeah, she's totally hallucinating. And when he won't leave her side, and their chemistry is off the charts, suddenly, it's a whole-new-world of fantasy and excitement, until it threatens to cost her everything…including her life.

Col has one mission: to kill the dragons who murdered the royal house of Li'Vhram—his family. But he wasn’t expecting to find his mate in the process. When a cute, curvy woman needs rescuing from the dragons he’s hunting, his senses go on high alert. She’s his mate. He’s sure. And he’ll do anything to make her his.

Knock Down Dragon Out is the first book in the new Soulmate Shifters in Mystery, Alaska series. It’s a full-length, standalone fantasy paranormal dragon-shifter romance story featuring a strong human female and an alpha male dragon prince from another world with a propensity for protecting and pleasuring his mate. Happily-ever-after and more guaranteed!


INTERVIEW WITH THE AUTHOR:
Q: Aside from the Soulmate Shifter Series, what other books do you write and what order should I read them in?
A: I have several other completed paranormal romance series. The Sanctuary, Texas series has an apocalyptic flavor and is set in a small Texas town. It's a wild ride with lots of romance, adventure, and enough heartache to make you need a box of tissues several times.

The VonBrandt Pack Series is another reader favorite! This series is set in a small town called Somewhere, TX. I actually have three series set in the world of Somewhere, two paranormals and a contemporary set with crossover characters.

Then spin off into the Moonbound series that picks up where the VonBrandt's leave off.