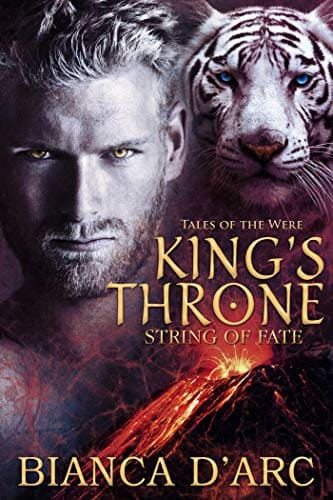 Can a lost princess and an injured soldier make a go of it when a false king wants them both dead?

A woman living in secret, hiding her true nature...

Gina is a doctor in New York City. What nobody knows is that she’s also tiger-shifter royalty, living in exile. Guarding her secret has kept her safe, but all that is about to change.

An injured soldier who calls to her heart...

Mitch is injured and out of the action. He wakes up in a strange place, with a beautiful woman. Normally, not a problem, but this woman is special. She’s a white tiger and daughter of the lost king. She’s too good for the likes of him, but there’s an undeniable spark of attraction drawing them closer together.

A love that will make the earth tremble beneath their feet...

When evil challenges, Mitch will fight to keep Gina safe. A harrowing journey to the side of a fiery volcano brings secret knowledge and a power none of them ever expected. Will it be enough to prevail?

String of Fate is also related to, and a part of, the larger Tales of the Were series. For more great big cat shifter stories set in this world, check out the Redstone Clan set, which includes:
- The Purrfect Stranger (novella)
1. Grif
2. Red
3. Magnus
4. Bobcat
5. Matt

Amazon - US Amazon - UK Amazon - CA Kobo Apple iBooks Smashwords
Genre: Paranormal, Suspense
Book Length: Novel - 150-320 Pages
In general words, the paranormal literary fiction genre comprises beings and happenings beyond the world of normal scientific comprehension of the natural world. Novels in the fiction genre are all put in the actual world. However, they comprise experiences that defy scientific explanation. For instance, stories put on earth contain angels, demons, witches, psychics, witches, etc. If you love to read some books with ghosts and angels, you must add this category to your reading list. Many books available in the market come under the Paranormal Genre, and you can buy them online or offline.