Hot for the Holidays: First in Series Second Chances Romance Skip to the content 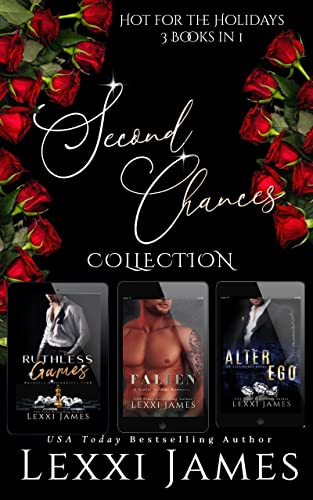 Second Chance Billionaires in every book!

RUTHLESS GAMES: RUTHLESS BILLIONAIRES CLUB
A fiery heiress. A global empire. And a hot billionaire hiding in plain sight.
Meet Davis R. Black … aka Richard. Some know him as a tech mogul. To Jaclyn, he's the King of the A-holes. Which is why this billionaire is hiding his in plain sight.
Because if she knew who he was, there's no way she'd let him get close. She'd never date him. Or kiss him. And she sure as hell wouldn't lose her ever-loving mind from the taste of his lips or the sin of his touch.
Would she?

FALLEN: SINFUL SOLDIER ROMANCE
Kathryn Chase never imagined saving his life would lead to her submission.
Jake Russo thought he could leave it all behind.
Being a soldier. And his life as a Dom. A brush with death will do that to a man.
Make him believe that abandoning the past would be his only future.

But he had one cross to bear.

Watching over Kathryn Chase . . . in secret. Keeping an eye on this woman.
Her unangelic guardian paying back a debt.

ALTER EGO: AN ALEX DRAKE NOVEL
Every billionaire has a dark side.
Alex Drake has everything. Money. Power. A dangerous dark side that shouldn’t be played with. But when one woman wants all of him, and another only wants to protect him, how far will one man go to teach each of them …
His game. His rules.

Warning: Full Steam Ahead. Lexxi James Books are seductive, suspenseful romances filled with fun, sensual, and sizzling high-heat love scenes.
Amazon - US Amazon - UK Amazon - CA
Genre: Military
Book Length: Long Novel - 320-650 Pages
The military is a genre of fiction focusing on military actions, such as warfare, conflicts, battle, fighting, or army life. For example, the military genre can include an autobiography of a member of army personnel who did amazing things or decided that changed the tide of a war utilizing the new or radical military plan. Another autobiographical example maybe a president or other leader (based upon the country) who had been involved in political relations which started or finished a war with something of a military foundation or plan. The military genre may also have novels about weaponry or equipment.