His Pledge to Honor: a Sweet Marriage of Convenience Romance Skip to the content 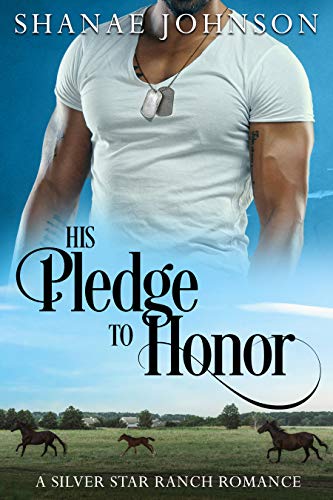 His Pledge to Honor: a Sweet Marriage of Convenience Romance (The Silver Star Ranch Book 1) by Shanae Johnson

Scout Silver can rehabilitate the most wounded of horses. But when an injured soldier shows up at her ranch, will she follow his lead down a trail of love?

Though she’s the daughter of a general, Scout Silver is used to giving orders, not taking them. That's why horses thrive on the rehabilitation ranch she runs with her half-sisters. Over the years, her absentee father’s many divorces created a patchwork family, held together by their love of the ranch. But his last will is an order that threatens to rip their lives apart.

As the leader of an elite group of soldiers run by the brilliant tactician General Abraham Silver, Lincoln Rawlings has set out on his final mission—to fulfill the dying wish of his commander by ensuring that the general's six daughters are taken care of. When Linc arrives on the Silver Star Ranch, he learns that what the Silver sisters need are husbands, else they’ll lose their beloved business. Instead of doing an immediate about-face, Linc's heart stands at attention under the assessing gaze of Scout, the eldest Silver.

Unwilling to let her father once again interfere in her life, even from the grave, Scout has no plans to give in to the general’s demands. But when she meets the handsome and accommodating Linc, she has a hard time reigning in her heart.

Letting down the general is not an option, but Linc is hiding a secret from Scout. And if she learns of the deep wounds he bears, he might lose everything—the ranch, his honor, and the woman he’s falling for.

Find out if love can truly heal all wounds in this light-hearted, sweet romance of convenient arrangements that unfold into lasting love. His Pledge to Honor is the first in a series of marriage of convenience tales featuring Wounded Warriors who are healed with the power of love.
Amazon - US Amazon - UK Amazon - CA
Genre: Military
Book Length: Novel - 150-320 Pages
The military is a genre of fiction focusing on military actions, such as warfare, conflicts, battle, fighting, or army life. For example, the military genre can include an autobiography of a member of army personnel who did amazing things or decided that changed the tide of a war utilizing the new or radical military plan. Another autobiographical example maybe a president or other leader (based upon the country) who had been involved in political relations which started or finished a war with something of a military foundation or plan. The military genre may also have novels about weaponry or equipment.