He Has Charm - Pillow Talk Books Skip to the content 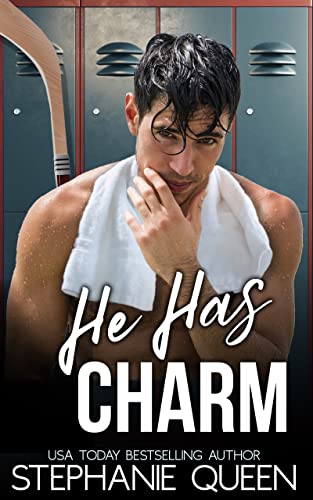 He Has Charm by Stephanie Queen

Maddox
If I'd known there was a camera running, I swear I would have kept my clothes on.
But how was I supposed to know? I was blindfolded...

Traded and sentenced to spending the remainder of the season being watch-dogged by one of the most serious jailers--I mean agents--I've ever met, Harper the jailer tells me I need to pretend I'm a monk.
Too bad she also happens to be temptation in a pin-striped suit sent to test my resolve with her sweet buns.
But it's only for four months, so I can deal with it, right? Concentrate on hockey and winning and ignore sugar buns.
Easy, right?

Problem is there's a lot more to Harper than sugar and buns...

"No relationship with the clients that isn't a professional one," says my boss. "And Harper, if there is any hanky-panky, it's a fireable offense."
My boss is an ex-player—hockey that is—and the best in the sports agent business. If he fires me, I'm done. I may as well hang up my sign-on-the-dotted-line pen and get a job at a shoe store...
But it's only for four months. I only need to resist the hockey hunk's charm until the end of the season to keep my job and get a big bonus.
Easy, right?

Problem is there's a lot more to Maddox than sexy charm...

He Has Charm is a full length New Adult hockey romance set in the world of the Boston Brawlers hockey team. You'll see players from other stories drop in for fun, but this book can be read as a stand-alone. If you love hot hockey players with massive charm and a sense of humor, forbidden romance with a slow sizzling burn and all the feels right up to the satisfying happy ending, you'll love this story! (Contains sex and language for a mature audience.)