HADES: Stephanie and the Merciless Reaper: 50 Loving States, Skip to the content 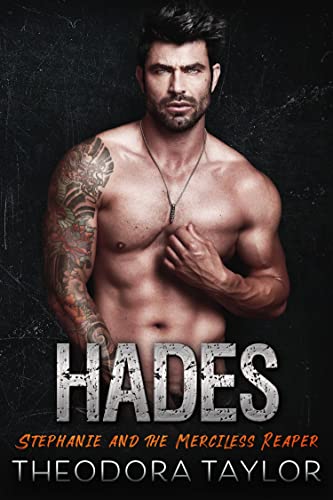 I was born a few moments after midnight on January 1st. On my 21st birthday, my father throws me the most lavish New Year's Eve birthday party Baton Rouge has ever seen—then he tells me I'm a woman now, and that means I belong to a man he owes a blood debt.

No, not a man. A demon who feeds on my family’s pain and suffering. Especially mine.

His name is Hades Fairgood. But he is neither good nor fair.

He's the twisted ruler of a biker underworld, and everything my dead mother warned me to avoid. Dirty rich, stupid hot, and merciless. There's not even a smidge of human left in his bitter, vengeful heart. I find that out the particularly cruel way when he renames me Persy--short for Persephone and has PROPERTY OF HADES tattooed across my back.

So that I never forget...

I'm his possession now.  He owns me, mind, body, and soul.

He’s a needlessly beautiful monster who I must escape. Of course, I must.

The longer I’m with him, the more confusing it becomes. Is he a merciless monster or a wounded man in need of love? My love?

It doesn’t matter. It shouldn’t matter either way. I just hope I can escape his wrath before he ruins me.