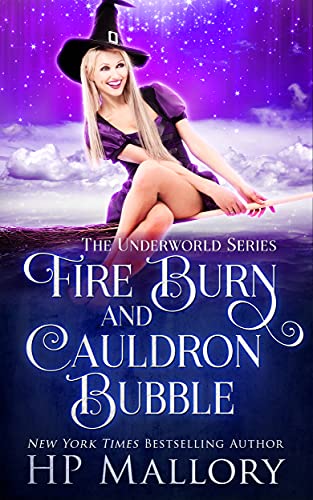 First in the New York Times bestselling Underworld Series! If you like your books steamy and you appreciate a good witch, warlock, and vampire romance triangle, then read on!

Life isn’t bad for psychic Jolie Wilkins. True, she doesn’t have a love life to speak of, but she has a cute house in the suburbs of Los Angeles, a cat, and a quirky best friend.

Enter Rand Balfour, a sinfully attractive warlock who insists she’s a witch and who just might turn her life upside down. Rand hires her to help him solve a mystery regarding the death of his client who also happens to be a ghost. Jolie not only uncovers the cause of the ghost’s demise but, in the process, she brings him back to life...

Word of Jolie’s incredible ability to bring back the dead spreads like wildfire, putting her at the top of the Underworld’s most wanted list. Consequently, she finds herself at the center of a custody battle between a villainous witch, a dangerous but oh-so-sexy vampire, and her warlock boss, Rand.

Amazon - US Amazon - UK Amazon - CA
Genre: Paranormal
Book Length: Long Novel - 320-650 Pages
In general words, the paranormal literary fiction genre comprises beings and happenings beyond the world of normal scientific comprehension of the natural world. Novels in the fiction genre are all put in the actual world. However, they comprise experiences that defy scientific explanation. For instance, stories put on earth contain angels, demons, witches, psychics, witches, etc. If you love to read some books with ghosts and angels, you must add this category to your reading list. Many books available in the market come under the Paranormal Genre, and you can buy them online or offline.