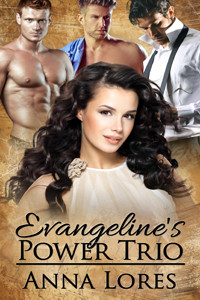 At the top of her game as a prestigious attorney, Evangeline Zanipolo walked away from it all. Despite an obvious lack of skill, she tries her hand as a massage therapist. But professional success is not her goal. All she wants is love, marriage, and babies with the two men she's engaged to marry. Then both men dump her, and she's left questioning her life's decisions. Just when she's ready to throw in the towel and try a traditional relationship, three forever-bachelors walk into her life prepared to give her everything she's ever dreamed of...if they can iron out all the kinks.

Sexy businessman Brice Loffiten has always kept his lovers at arm's length, but Evangeline has snuck past his barriers and secured her spot inside his heart. He wants her all to himself, but her insatiable desires have him doubting he'll be enough.

Power attorney, Dylan Russo is back in town and ready to assert control—in the bedroom. But Evangeline might not be ready to surrender to his type of dominance.

Champion Jerry Wynn needs to be number one in a relationship. With him at the helm, the four could conquer anything. But can the other men in Evangeline's life accept him as the head of the household?

Amazon - US Amazon - UK Amazon - CA Nook - BN Apple iBooks Google Play Amazon - DE Amazon - FR Amazon - ES Amazon - IT Amazon - NL Amazon - JP Amazon - BR Amazon - MX Amazon - IN
Genre: Contemporary, Erotic, Suspense
Book Length: Novel - 150-320 Pages
Books in the contemporary fiction genre are composed of stories that may happen to real people in actual settings. The novels don't fall under other genres or categories. They often happen in precisely the same period that the reader is living (the present), with things that are now, or might be occurring, precisely the same period. The contemporary genre also contains conversational and casual dialogue and sometimes even regional dialects. Contemporary fiction novels will provide you a lot of choices to grow your life reading list. Writers, generally speaking, search for what's trending in their own time for their literary work since it lets them illuminate the weakness or strength of the society.