All Cowboy and Charm - Pillow Talk Books Skip to the content 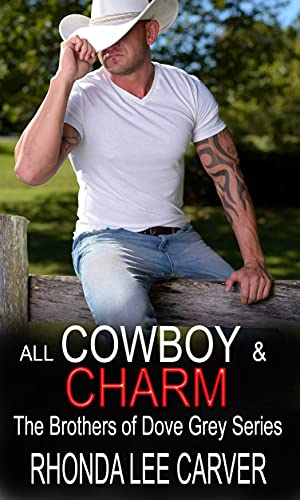 All Cowboy and Charm by Rhonda Lee Carver

Successful author Melanie Jane decided after a very public divorce that she would prove to the world, especially her critiques, that she didn’t need a man to make her dreams come true. So, she wrote a best seller and used a fertility clinic to get pregnant. An accidental switch-a-roo left Melanie curious…who was the father of her baby?

Coop Dawson was still grieving the loss of his twin brother when some lady showed up at the family ranch and announced that she was pregnant by Cade, impossible since he’d been gone for over a year. Coop didn’t have the patience for scam artists. He told her exactly how he felt then made her hit the road. Yet, after reading a letter from a fertility clinic, he realized she’d been telling the truth. Now he needed to turn things around fast before he lost the chance at knowing Cade’s child.

Coop needed to step up for the first time in his life and do the right thing for everyone. He promised his brother in a late-night prayer that he’d take care of the child—but what Coop didn’t realize he was already falling for Melanie and he couldn’t imagine life without her. Will she learn to trust him? Or will he screw up every chance he’d been given?

Amazon - US Amazon - UK Amazon - CA Nook - BN Scribd
Genre: Contemporary, Western
Book Length: Novella - 60-150 Pages
Books in the contemporary fiction genre are composed of stories that may happen to real people in actual settings. The novels don't fall under other genres or categories. They often happen in precisely the same period that the reader is living (the present), with things that are now, or might be occurring, precisely the same period. The contemporary genre also contains conversational and casual dialogue and sometimes even regional dialects. Contemporary fiction novels will provide you a lot of choices to grow your life reading list. Writers, generally speaking, search for what's trending in their own time for their literary work since it lets them illuminate the weakness or strength of the society.