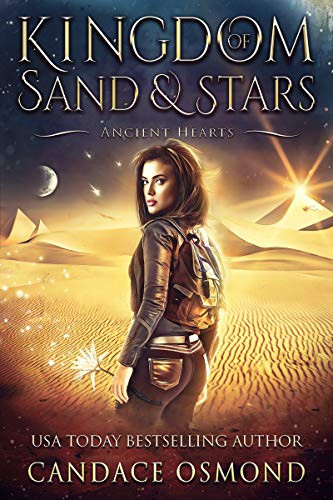 Love is a weakness, even for the Gods.Young archaeologist, Andie Godfrey must conquer her addiction and accept the opportunity to uncover the Egyptian cave where her father and boyfriend were last seen two years ago. But, the pain of the past is hard to forget when you’re thrown at its feet.Using her father’s secret research, Andie pieces together a clandestine conspiracy, centuries old, that will shatter the world’s idea of ancient Egypt. But before she can solve her father’s cryptic puzzle, Andie’s betrayed by the leader of the expedition, and finds herself left for dead at the bottom of a pit where she accidentally activates a portal carved in stone.Unsure whether she’s dead or thrown back in the midst of time, Andie discovers an advanced civilization unlike anything she’s ever known and is soon faced with a ruler among Gods; a man from her own past who once ruled her heart.Fans of OUTLANDER, THE MUMMY, TOMB RAIDER, and STARGATE are going to devour the Kingdom of Sand & Stars series!One-click Ancient Hearts and dive into the magic today!