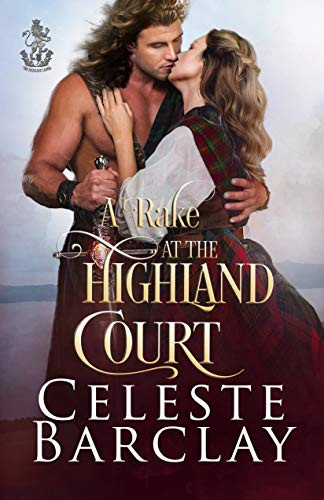 A Rake at the Highland Court by Celeste Barclay

Can a lady-in-waiting resist the pressure to marry a stranger?
Cairstine Grant has spent two years carefully cultivating a reputation at court that is sure to drive away any potential suitor. Traumatized from an attack as a young woman, Cairstine is bound and determined never to marry and never to be subjected to a man’s control. She’d rather become a nun than a wife. But one obstacle stands in her way: her younger sister can’t marry the man she loves until Cairstine marries first. When Cairstine’s father refuses to consider her choice to become a nun, can Cairstine convince an unsuspecting friend to pose as her betrothed? Can she overcome the scars from her past and form a genuine partnership with a man she was never supposed to fall in love with?

Can a renowned rake reform his ways in time to protect a lady-in-waiting he never thought he would befriend?
Eoin Grant watched his twin brother, Ewan, fall in love and marry. A romantic at heart, Eoin hopes one day to marry and find true affection with his wife. But in the meantime, he’s happy to live the life of a bachelor. When Cairstine Grant blindsides him with a proposition to pretend to be her betrothed, Eoin realizes a real future with Cairstine might be better than pretend. But one obstacle stands in his way: Cairstine will only agree to a marriage in name only, and Eoin’s dreams of having a family one day. When Eoin’s feelings develop beyond friendship, can he convince Cairstine to trust him enough to see a future together? Can Eoin help Cairstine overcome her fears and prove that his feelings are pure?

Can a relationship based upon a falsehood grow into something real?
Stripped of her choices, Cairstine turns to Eoin for help, but she fears making a lasting commitment. Eoin’s conscience demands he help Cairstine when she asks for his help, but he’s not certain he can live with a lie that might tear apart his heart. When danger and necessity force them to decide, Eoin and Cairstine discover playing pretend isn’t just for children.

If you like steamy romance with touches of danger and suspense, then you’ll love Celeste Barclay’s A Rake at the Highland Court, a passionate addition to The Highland Ladies series.

Welcome to Robert the Bruce’s Highland Court, where the ladies-in-waiting are a mixture of fire and ice. The Highland Ladies, the STEAMY spin-off series from Celeste Barclay’s The Clan Sinclair series, returns to the Medieval royal court for love and intrigue.